Cards from my kids...

Today is my bday so C took the kids to school... A programmed a greeting card for me using Flash. Check it out:

N made a drawing of me kiteboarding while lots of people are pointing at me "because I am doing it so well"... Oh, yes, notice that I am eating a doughnut! 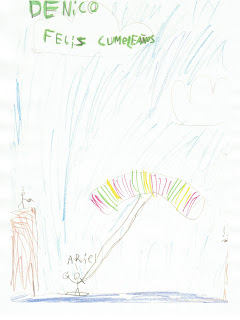 And here is a screen shot of the birthday game P made using Multimedia Fusion. Note the resemblance between me and the person in the game. 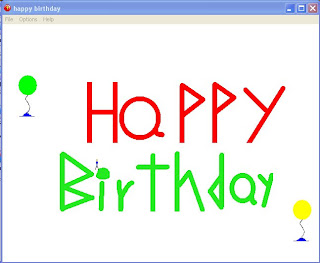 Posted by puchanix at 4:01 PM No comments:

We started talking today about the Nobel Peace Prize that was just awarded to Obama. I told the kids that it felt to me like a "downpayment" - since he hasn't yet made any lasting contributions to World Peace (although we all hope he will).

We spoke about when it might make sense to pay for things in advance - as opposed to after the "services" or "products" have been received. In most situations, one must be careful about pre-paying, as one might not get what one expected - and would then have little recourse having paid for it. So it is most common to pay after the fact. Musica paga no suena.

However, there are situations in which paying up-front, or at least providing a "downpayment" makes sense. This could be when such a payment might motivate or encourage the recipient to provide a better service. I used the examples of restaurants. Imagine you travel to a foreign city and go to a fancy restaurant. You get good service and leave a good tip. What benefit did you get from giving the tip? None really. You do it out of fairness and goodwill. However, imagine that as you get to the restaurant you immediately give a tip to the hostess. You might then get the best table at the restaurant and a particularly atentive service (of course, you risk getting nothing in return, which is often the risk of prepaying).

Hopefully the Nobel will make Obama even more determined to work towards world piece...
Posted by puchanix at 8:22 AM No comments:

one week to live

I wanted to get the kids thinking about the importance of making every day count. Didn't think it would be appropriate to tell them to imagine they would die soon - at least not in the individual sense. So I told them to imagine that a meteorite would strike the Earth in a week. This didn't seem to freak them out. A said he would stay home because the world would be in chaos. P & N spoke about toys & video games they would buy & play. C, who was catching a ride with me today, said she would fly her extended family to SF to spend time hanging out with them.

I then modified the scenario to one in which they were the only ones who knew about the meteorite. That way, there would be no chaos around. And I then further modified the scenario to one in which there was only a 10% chance of the meteorite hitting the Earth. The idea now being to force them to balance short term fun with long term consequences - of skipping school, for example.

We ran out of time so I plan to return to this topic. I am hoping that we can get into a habit, as a family, of doing truly meaningful things every week (if not every day). What would constitute "truly meaningful"? My initial thinking is:

Posted by puchanix at 8:19 AM No comments:

Take away? When you see a 4.3 rating on Amazon (or Yelp), know that is an "average" rating. For something to be really good, the rating should be 4.5 or higher. And, of course, a 3 is pretty bad.
Posted by puchanix at 8:25 AM No comments:

the power of control & possesion

I told the kids about an interaction I recently had with a developer that I work with. We've are modifying a web site and don't entirely agree on what to do. As we've been going back and forth more of his than mine ideas are getting implemented. Why? N came up with the answer right away: he is the one doing the changes! Sure enough, those who control the resources can have a larger influence than they would otherwise have... Of course, since in theory I have the decision authority, I can always enforce my point of view, but then it is important to "pick your battles"... We discussed this concept and I told the how my wife & I constantly have to pick our battles with them - even thought to them it might seem as if we pick every battle...

Back to controls & possession, I gave them two additional examples: money & real-estate. In negotiations that involve money changing hands, he who has the money has more power (regardless of what the contract might say), and he who is occupying a property, has more leverage than those who don't.
Posted by puchanix at 10:57 AM No comments: