Earlier this year I learned to kite-surf on a hydrofoil. After plenty of hours I've figured out how to go upwind and downwind. I've been doing my races on it and really loving it (I am the second from the right on the photo below). 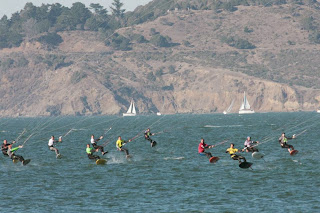 But I haven't learned how to tack yet. Instead, when I need to change tacks upwind, I do a gybe (which is very slow and hurts me during the races). The very top racers do roll-tacks while on their foils. This is world champion Johnny Heineken in the middle of a foiling tack: 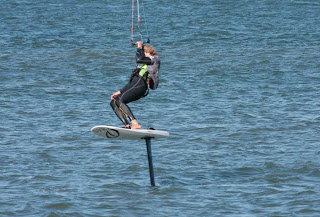 I was discussing this with the boys this morning and their response was: sure you can learn it. So, I had an idea: how about a family challenge? Each member of the family must establish a challenging goal and a timeline. Then we can all work on our goals. They escaped from the car before responding :-).  To be continued...
Posted by puchanix at 8:43 AM 1 comment:

Stuck in a bus with a weirdo

A few days ago Nico came with me to a party at our yacht club. He went for a stroll around the club while I chatted with my kiter friends. Then I realized Nico was back in the room having what looked like a very engaging conversation with an adult I didn't recognize. I imagined the adult was a windsurfer or some other club member, and thought that it was cool that he was so engaged with Nico. They were just a few meters from me but I couldn't hear what the were saying. I figured I would leave them alone and kept chatting with my friends. Ten minutes or so later Nico came by and asked if we could leave. It was getting late so I agreed.

As soon as we left the club Nico told me the guy he was talking with was crazy, drunk or both. He was talking to Nico about Satan, Nazi cruelty and all sorts of inappropriate things. I was stunned. They had been just a few meters from me, in the safety of our yacht club! I asked Nico why he didn't leave. Nico found himself in an uncomfortable situation. He knew the conversation was inappropriate yet he was somewhat paralyzed. Didn't know what to do, so did nothing. Just let the guy keep talking while nodding.

I spoke with the boys about the importance of stopping situations like this one. There is no need to be rude, confrontational or to make a scene. A simple "excuse me but I have to go" usually works - particularly when your father is a few meters away. Other situations are more challenging: imagine being in a crowded bus with someone right next to you saying inappropriate things. You could try saying that you have to do something, then focus on your phone or a book. If you can, you could move to a different part of the bus. The less you say the better. Be polite but firm, then disengage. Worst case, get off the bus and catch the next one.
Posted by puchanix at 8:54 AM No comments:

I recently got custom kite board for a racing hydrofoil. The board arrived before the foil and I discovered the holes for the screws to attach the hydrofoil were misplaced. I was upset with the board maker - particularly since his explanation was that one of his measurement tools can sometimes be a bit off. He said I should file the holes on the hydrofoil when I receive it. This seemed like a bad idea: filing my brand new carbon hydrofoil to make up for the mistake of a board maker? Fortunately, I decided to wait until I received the hydrofoil to decide what I could do. When I got the foil the holes were indeed off, but filing them to make them fit to the board was very simple and didn't compromise the foil as I feared.

We sometimes overreact to problems - particularly during our youth when we have "shorter fuses". Give problems "time"... Sometimes, they even sort themselves out on their own. Other times, like in the above situation, the solution turns out to be simple. And even in situations in which the problems remain big and serious, a cool head is a always good thing.
Posted by puchanix at 10:23 AM 1 comment:

Until yesterday afternoon, the government shutdown was another act of government stupidity that we read about in the news. The closure of Yosemite and the Lincoln Memorial were far away events... But yesterday when I went to kitesurf I discovered that Crissy Field was closed. The parking lot entrance was blocked but the exit was open. There were people inside so I simply drove through the exit. Others did the same thing until a policeman showed up and started to stop those who drove in through the exit. The ridiculous thing was that the policeman didn't do anything about those of us already inside enjoying the park. His only issue was with those driving in through the exit. So, once you got in, you were fine. It was just getting in that was the problem. The term "loophole" came to mind. Alejandro thought of the game Capture the Flag.

The next day it got worst (or better depending on your point of view). The police blocked both the entrance and the exit so we had to park outside and walk in. The police had no problem with people using the park as long as we didn't drive into the parking lot. Not sure I understand their rationale. The whole thing felt like a silly show: the policeman had to pretend to close the park. And as a result we had to cross a busy street and carry our heavy kitesurfing gear for a few hundred meters...

Not a proud day for USA.
Posted by puchanix at 9:48 AM No comments: