I recently traveled to a kiteracing competition in Mexico. Unpacking at the hotel I was devastated to discover that my raceboard had been badly damaged during the trip. We had traveled all the way to Mexico but without my raceboard I wouldn't be able to compete. Worst still, there is a year long wait to get a replacement board like mine. And, needless to say, the airline is not going to do anything for me.

Yet it turned out that things were not as bad as I thought... With the help of my fellow kiteracers (who fortunately include the best in the world) I was able to patch the board so that I could use it during the competition. I then remembered that my credit card had luggage insurance. I contacted them and they say that indeed they would cover my loss, but that I first had to file a claim with the airline. I filed the claim with the airline, not expecting anything but just so that my credit card could process the claim, but to my surprise the airline agreed to reimburse me the full cost of a new board (go Virgin America!). I do have to wait over a year for my new board, but in less than three weeks the board maker performed a pretty good repair to my damaged board, so that it is totally fine to use for now.

Couple of takeaways I shared with the boys: things are often not as bad as they originally seem. Give them a bit of time and be pro-active about making things better. I almost left my broken board in the hotel and gave up entirely on the competition, but the fact that I took it to my friends to see if there was something we could do made all the difference. And even if the odds of something might be long, i.e., getting a reimbursement from an airline for damaged luggage, you should always give it a try. Sometimes you will be pleasantly surprised. 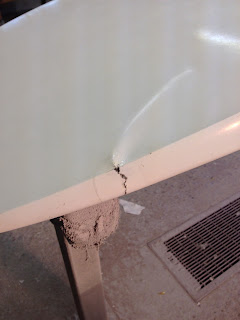