Get as many facts as you can upfront before making decisions

Last Thursday I volunteered to do race committee for the kiteboard racing series I participate in. This means getting on an inflatable motor boat and helping set the marks for the course, rescue kiteracers who get in trouble, and in general help run the race. Since Paco had no classes the following day I asked him if he wanted to join me. He said he would let me know in the early afternoon. When the afternoon came Paco said he wanted to come. I was very glad to have Paco join me, even though picking him up meant I had to change my plans for that afternoon. I also contacted the race committee to double check it was OK for Paco to come.

When it was time to leave Paco started asking me questions: how long would we be on the water, what exactly would we be doing. Upon hearing the details Paco changed his mind: he no longer wanted to come. I was very frustrated with him. I had changed my plans and spent time making sure he could come, all for nothing. But the issue wasn't that. We sometimes change our minds. That is not the problem. The issue is that Paco said he would come without really thinking about it. He should have asked his questions up-front, before saying he would come. To his defense, he wasn't aware I would have to change my plans or do any work for him to come, but then we are frequently unaware of the things people do for us - particularly relatives and friends who go out of their way for us but don't want to make a big deal about it.

This reminds me of situations in which I set up a meeting and discover 3 minutes into the meeting that nothing will come out of it, and that a bit of checking prior to the meeting would have shown that. For example, a job interview in which the candidate's salary needs are out of line with the job's compensation. Or, an investor meeting in which the geographic location of the company is incompatible with the investor. These examples might sound silly but I've been in more situations like these than I care to remember. I have gotten better though about asking as much information up front as possible to avoid them.

So remember, next time someone asks if you want to go somewhere or do something, get the facts up-front and before anyone has had to put much effort on your behalf.

PS: Paco changed his mind again and came. I think he had a good time... 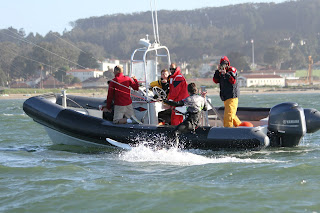 Interesting article. So, to take the facts upfront: Would you invest in an app for couple from Barcelona called 2gether app? I would be pleased to send you further info. Best regards, Nicolas